Kantemir Karamzin’s Lawyers Made a Statement on Judicial Outrage 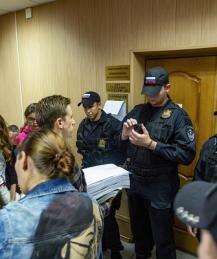 Yesterday Balashikhinsky court extended the period of detention of well-known lawyer Kantemir Karamzin. Federal Judge Olesya Kobzareva dismissed all the defence’s arguments and essentially supported the prosecution. Kantemir Karamzin’s case is already referred to as the “second Magnitsky”. His lawyer Marina Gromova considers the situation can be rescued by significant public resonance.

Kantemir Karamzin is well known in both lawyers and judicial environment. Some time ago the arbitration lawyer was successful in action against George Soros himself. Recently, he seized by court action 15 Billion Roubles from the owners of DSK-1 and FSK Lider Vladimir Kopelev and Vladimir Voronin in favour of his foreign client. One would think it was a time for champagne, but the defeated party did not forgive it. A 12-year old case was taken out from the drawers, according to which widely known in tight circles writer Oleg Blotsky pursued in court that he allegedly did not receive $200 thousand from Karamzin.

Then the case reached the Supreme Court of the Russian Federation, that rendered final verdict in favour of the lawyer and confirmed Blotsky debenture. However, in order to put it across with audacious and successful lawyer they decided to turn this civil proceedings into criminal judicatory.

Karamzin was placed into remand centre on 12 April. Neither he, nor his witnesses have been interrogated since then. However, when the court-established detention period expired, the prosecution requested to extend it. Balashikhinsky city court of Moscow Province appointed a sitting on the prosecution’s petition to extend the period of detention of K. Karamzin at 14:00 on 25 July. By that time tens of people representing the members of the lawyer’s family, friends, acquaintances as well as mass media representatives officially accredited to report the process in the press gathered around the court. However, neither they, nor other people came to the sitting could not attend it.

Breaching the law, the sitting was held behind closed door. Such attitude was motivated by the need for video conference communication, the equipment for which is installed in a very small room. The court’s decision was a surprise even for the lawyers as according to the law the lawyer was supposed to be escorted to the court on the extension of detention in person. As a result, increased security did not let mass media and the gathered people in and only Kantemir’s lawyer Marina Gromova shared the outcomes of the sitting.

“To be honest, I have a feeling I attended funeral”, – were her very first words after she left the process. On the monitor hung in the court room they saw some man with mask on and K. Karamzin lying next Karamzin. The judge asked him if he hears her and is able to attend the sitting. He replied nothing, but the person in the mask said that Kantemir hears everything perfectly. This was sufficient for the judge to continue the sitting.

The lawyers lodged objection against continuation of judicial sitting as they saw their client was not feeling well, he was unconscious and required immediate medical assistance. Besides, the defence reminded the judge that there is an article in the Criminal Code specially explained by the Plenum of the Supreme Court of the Russian Federation that judicial sitting on the detention of suspect can be held without him in very exceptional cases. And these cases are only two: either the suspect is in the Federal wanted list or he holds official document preventing him from escort under guard. Neither of these variants apply to Karamzin’s case, therefore he was supposed to be present in the court room and not on monitor.

The defence was suspicious that their client was not in the remand centre No. 8 as of the judicial sitting: one of the lawyers Kristina Kharitonova came to the start of the sitting to that remand centre in Sergiev Posad and was advised that Karamzin was not there. However, investigator Dmitry Nikolaev responded that there is another document proving that chickenpox quarantine was enforced at remand centre No. 8. And this absurd argument satisfied the judge Olesya Kobzareva, who cynically declared that she would not interrupt the sitting or rise.

Then the defence had nothing to do, but to challenge the judge as – according to Marina Gromova – Mrs Kobzareva’s interest in this case was seen by the naked eye. She actually blatantly demonstrated that she would extend the period of detention of K. Karamzin. But the paradox of Russian legal framework is that the challenge is considered by the challenged judge. Presiding judge left to the retiring room to think whether to announce self-disqualification or not. Using the break, the lawyers could collect all missing papers required for defence that the three guards did not allow to bring into the hearing room for over an hour. Other lackeys of Federal Bailiffs Service of the Russian Federation carefully guarded the room of the Chairman of Balashikhinsky court the lawyers tried to enter with the complaint for explicit outrage allowed during the consideration of their client’s case. This caused fair indignation among those came to support their friend and relative, who periodically chanted “Free Kantemir” or “Return Kantemir!”

When Olesya Kobzareva returned and predictably declared that self-disqualification will not take place, she was told that while she was absent it could be seen on the monitor that some medical manipulations had been performed with Kantermir. The lawyers considered that he was administered an injection with some sedative so that he did not come to consciousness. This did not confuse the judge and she continued the sitting. As Kantemir physically could not say anything in his own defence, his lawyer Marina Gromova did it. Her client prepared significant 150-pager document, where he described the absurdity of his consideration that has been on since 2007. Likewise, the judge was submitted complaint on accusations, unbearable conditions of detention, provocations and threats from FSS officers coordinating this case as well as on critical deterioration of health due to diabetes and other deceases.

The lawyer added that there are no proofs that the detention period should be extended as no investigative activities had been performed while Kantemir Karamzin is kept in custody: investigator did not interrogate him, the lawyers were not admitted referring to summer holiday period. This outrageous fact did not embarrass the judge Olesya Kobzareva, who decided to extend K. Karamzin detention in the remand centre until 10 October. After Marina Gromova left the court room she could not hide her bewilderment from the process.

She admitted that “nobody saw such outrage.” A number of times she felt like leaving this disgraceful judicatory. This is her first case for many years of legal practice when the case of uncondemned person is considered that cynically and categorically, which has nothing to do with the spirit of competitiveness that should prevail in the court of justice. Analogy to “Magnitsky case” who also paid heavy price for identification of multi-billion schemes is suggested.

Marina Gromova said that after all they have seen during the sitting her colleagues submitted a complaint to the Human Rights Ombudsman, member of Public Monitoring Commission at least to find out the state of health of Kantemir Karamzin at remand centre and the incarceration conditions. Nevertheless, she appealed to MASS MEDIA representatives as to the fourth power reminding that it was their strong position, which helped to collapse the contracted case of investigative journalist Ivan Golunov. In the case with her client Marina Gromova expressed confidence that powerful public resonance will undoubtedly facilitate the release of Kantemir Karamzin.